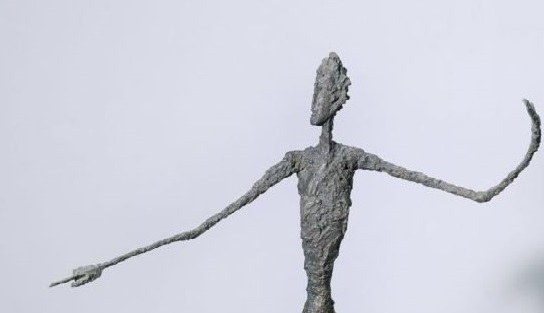 You do not need to talk in a gallery.  Dim white spaces rustle and whisper above polished floors. Peopled spaces, where muted sounds jostle to be heard, the sounds of thoughts and whispers, and footsteps, footsteps slow and soft or with positive heels.  Listen! To the negative spaces positively bursting, pushing at the limits, bustling with half-heard phrases from unheard minds.

Listen to the question marks hanging like hooks: ‘What am I supposed to think?’ ‘What was happening in his mind?’

Feel how the minds reach out tentatively yet must forbid the longing hands to touch. ‘Please do not touch’. It is not allowed. But the sculptor touched, moulded, daubed and fingered the plaster, and later caressed the rough and dully-gleaming bronze. Where his finger-tips smoothed the surface, the light now reflects. Shadows lie in the grooves, in the valleys of the mind.

Thought is uninterrupted in the shadows of my mind, for no one needs to speak. And we may not touch.

Do you see that one over there, with the short,

I need my tea.

Someone sat on my chair

while I was lifting a piece of paper

She must be stopped.

Ah, she’s seen us watching, she saw your glare.

There were only three words on it.

A tiny piece of paper,

torn from a notebook.

Where are we at? That’s

not to be indulged in,

I am, therefore I see.

That orange-haired one sees, but does not

So she needs to touch. And feel.

To be sure it’s there.

I don’t know what you’re on about.

I need my tea.

I saw how he crumpled the piece of paper that he had picked up, stuffed it into the pocket of his navy serge trousers. His body bulges about his belt — even the sculptor’s grim humour would be unable to reduce him to manageable proportions; to an elongated stick-torso lacking viscera, not at all.

That paper fell from my notebook.

I wrote a simple question: ‘Where?’

The woman was looking in a shop-window, looking at shoes that I thought she could not afford, perhaps yearning for expensively-shod feet. I could have asked another man, but women can be more sympathetic, so I came and stood beside her with my question extended. I made myself unthreatening, a genuinely questing face.  She was surprised, but it didn’t take her long to understand, for she glanced along the street and then pointed.

She mouthed, ‘That way,’ silently.

Her mouth and face made exaggerated movements. Behind us the traffic roared and a bass-beat drummed from a passing car, vibrations trembling in the diesel haze.

I smiled and cupped my hand behind my ear, and formed my lips into another question: ‘What?’

‘Oh!’ she replied, out loud, and ‘Sorry.’ She shouted a little to help me understand: ‘That way, opposite Fortnum and Mason’s. You can’t miss it. You’ll see the pillars.’

I saw the pillars. A small girl clasped one, hugging it as she watched a pigeon that waddled, fat-breasted. From ground-level, adult legs and torsos are pillars (but not so the body of the one who wants his tea, the one who has my paper and the spheroid frame, enceintured like a figure-eight).

A child’s head must angle back on its shoulders, looking up at tall figures scurrying past; but here figures are cast in freeze-frame, rooted to the bare bronze like trees anchored in brown forest mulch.

Tall trees, stirred into violent motion by the battering wind. Children were shrieking in the wind, tilting their bodies, arms spread, trying to fly; the wind was snatching away their shouts and laughter, stimulating their living bodies with its own furious energy. Ahead, the trees bent and roared, and I walked silently away, swiftly fleeing that memory, in amongst the tall dark trunks. Deeper and deeper into the dimness, until the dark, comforting pillars remained unmoved by the shaken canopy and the sounds were muted. Not even a blackbird chirred in warning when I leant against a living trunk and stared into the unspeaking future.

But she was moved by my shaking body. She came to me from the darkness, her pale beauty softly shining with green-white moth-light among the columns. A ghost? A mirage of things ahead? I could not tell, but she came to me, smiling; like ivy she wrapped her arms around me and bound me to the grey, smooth bark, holding me until I was still. And I wept because I could not speak, but she laid her fingers against my neck. She leant her head against my chest and pressed her ear against my throat and when, unspeaking, I said, ‘I love you’, she entwined me in her pale blonde hair like moonbeams and said, ‘I love you, too.’

She heard my silent words and gave me hope, but soon afterwards her pale column of light grew dim and dark and she left me. She left me hope, and she went away. But she couldn’t take away the memory: the memory of the misguided missile, flying in play, that had once homed in soundlessly on my home of sound. The memory,  of children screaming, clutching at each other and at the remnants of my voice — as I lay with shattered throat and screamed, unscreaming …

Is he ill? That one over there,

Who shakes, and pulls at his poloneck,

Is he ill? Is he having a fit?

The one with orange hair watches,

sees how – in answer to the question –

he takes out his notebook

from the pocket of his jacket.

His pencil scratches; he writes,

at once becoming calm.

She sees, and touches on

A piece of paper with three words,

But there was a streak of white, a scar.

A mark at his throat.

I had become uncalm. I make odd groaning sounds in my haste to explain and reassure, and my mouth snarls. But now he has my two notes to compare, no longer to puzzle over because all is clear. People had stared, sensing an interesting distraction, but now they have all moved on, and the dim white spaces softly rustle with unspoken sound. For no one — save the watchful attendants — need talk in a gallery.

Around us the thin figures stare into the void from tiny, pedunculate heads, and men stride ceaselessly, locked forever in a single measuring pace; forever trapped in that moment of their silence. We — they and I — are trapped inside our heads. We may not speak.

But surely, here, this is one who calls? His long arm points, his finger outstretched, his left arm curves behind, beckoning.  I can almost hear his voice, urging us, begging us to ‘Hurry! Come and see!’

He is urgent in his need to show, his finger straight and statuesque as a black pointer’s nose. I look to see what mysteries we should see, but he points only at passing people, spectators moving past his gaze, schoolgirls with sketchbooks, a drifitng greybeard. A young woman with orange hair.

And then I see the story that he seeks to show. He does not gesticulate to indicate but to create: multiple shadows at his feet, grey radii on a whitened base. The left arm grasps an invisible world, holds it against his shoulder; its shadows, each like a succeeding movement caught by stroboscopic light, grope straight-armed, then curve and pull, enfold.

‘Come close,’ he is saying,’ let me put my arm around your shoulder and show you the world.’

But with his other hand he points, and the shadows of the pointing hand stir a memory and I search my mind for connecting images. I stare and stare, and crouch down, mesmerised by the silent drama at my feet.

A living hand lays a small object, a lipstick case, near the shadow’s free end. The woman in black with the orange hair crouches by the sculpture’s toes.

‘That’s a fish,’ she says quietly. ‘In a moment he will strike and catch it.’

She smiles and leans forward, and her short bright hair is lit like the sun that breaks through dark clouds. At my instant of identification, she had seen it, too. My hands are rigid, I feel my face and mouth contorting  and, in frustration, I push at the sound, trying to force it out.

‘A heron,’ she whispers.

I nod, struggling and spasmodic.

She laughs softly. ‘Ssh. We’ll get thrown out for talking.’

She reaches out to help me to my feet, for I am weak with disbelief.

Hush, leave them be.

at shadows only; things that cease

existence when the lights

how she needs to touch

his voice is there.